RSS
← So I Made My Own Brush Display Stand…
Yakusugi (even cheaper) and Limited Brushes on CDJapan, again. →

I normally don’t do anticipatory posts, but shit am i excited. Side note, shame on me for getting crazy excited enough about these brushes to post this rather than any of the numerous actual brush reviews+comparisons in my insane backlog (120 and counting, thanks for asking).

Anyhow.  What is this prodigal daughter shopping for this time? Well, CDJapan recently added Houkodou brushes . Hou-what? Houkodou, another Kumano fude company. Their most famous/popular one is probably their BZ1 Dome Foundation Brush, a round kabuki looking thing that has been well received on SMUT and IG but I’m way more interested in the following brushes from the “Brilliant Gold” Series which i never knew about, but are now a new obsession:

I’m extra giddy about getting these for several reasons:

I’m restricting myself to getting the two above eye brushes for now but my wish list is already making my wallet (and brush display shelf) nervous. I will definitely be picking up the G-S3 (3,000 yen) & G-S5 (2,500 yen) in the future because I’m a sucker for affordable kolinsky filbert brushes.

Like seriously, when am I going to hit the enough point? Never, which means these babies will be joining me sometime in the near future for sure. The G-S3 might dupe my Shu Uemura #10 (can never have enough dupes for this) while the G-S5 seems more like a large concealer/lip brush with the potential for detail eye work or smaller lids.

There’s also another big kolinky eye brush (W-S1 Flat Eyeshadow Brush for 3,500 yen) I’m being half tempted by, but it doesn’t have the pretty handle of the Gold Series.

What it does have is a nicely tapered point that makes it look capable of being the only brush I’ll need for most eye looks.

Their face brushes are also tempting as hell and reasonably affordable. Their pure grey squirrel brushes face and cheek brushes are even cheaper than even Koyudo, and that’s my favorite *cheap* brand! Once upon a time, Koyudo was the King of Cheap, but then the Evil Price Increase of 2015 hit…..  Now there’s a new king, with better aesthetics. I much prefer the Houkoduo Gold Series’s looks to the Koyudo BP High Class Series which i have complained numerous times, do not look “high class”. They look like they were pulled out of those makeup/dress-up toy sets for little kids playing with makeup. Now that i have another affordable brand to choose from… well there’s no competition. The two brands’ ranges barely overlap in brush shape and material, but for the ones that do… Houkodou all the way.

Anyhow I’ve been seriously checking out their G-C6 Domed Cheek brush at 5,000 yen, around $42. I love domed brushes because they tend to be thicker, denser than their flat paddle counterparts, and excellent at blending stuff out w/ minimal strokes. Here are the G-C6 brush specs:

And some popular dome cheek brush cousins, all goat:

Houkodou’s Gold Series also has two face powder brushes for 9,500 yen each. WHAT ?!?! Ya, I had to double check the description make sure they were, indeed pure squirrel. The G-F2 Domed Face Brush  has the following specs:

because its a potential dupe for the Chikuhodo Z-9 (16,000) – which measures in just 2 mm larger in all dimensions – at a fraction of the cost. 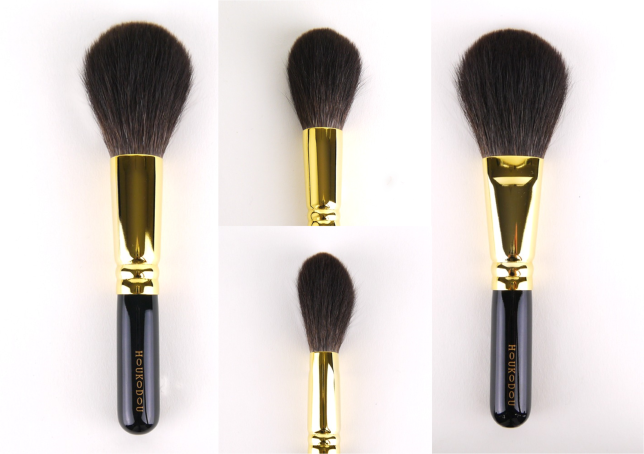 The Houkodou face brushes are a damned good value. I’m not sure which one to prioritize but i have an inkling that the dome powder brush would have more resistance in the body.

If I’m happy with the G-F3 when i get it, i’ll just skip getting the Z-9, crossing it off my lemming list, because paying 6,500 yen extra for 8 cubic mm more fluff is not worth it to me. 6,500 yen is almost a whole other cheek brush i could get (see below).

Last but not least, there’s G-C2 Flat Blush Brush (7,000 yen) which is most similar to the Chikuhodo Z-8 , but not similar enough to be called a dupe in my book. The Z-8 is one of my favorites cheek brushes (review here) but also quite pricey.

It’s the closest one I can find, so the G-C2 might actually be a uniquely large blush brush that could double as a powder brush as the Hakuhodo B/K002 ($83) which is intended to be a face powder + cheek brush and measures in at 50mm. I don’t have, and can’t find, very many blush brushes (squirrel OR goat) with bristles longer than 40 mm, never mind the 45mm that the G-C2 features. Proceed carefully with this on if you like precision with your cheek product placement, but it seems like an excellent powder brush for smaller faces if the G-F3 Flat Face Brush seems to big. The G-F3 is just 5mm longer so if size doesn’t matter, get the G-C2 and save 2,500 yen. Addict that I am, I think I’m getting both eventually.

I’m not completely keen on having an affair with the BZ-1 (6,000) because it is made of sokoho and I already love my current chubby, dome kabukis: Koyudo Fuwafuwa (made of Saikoho) and Fupa 14 (goat + squirrel). I also love my Fu-pa 7 to bits (I know it’s a completely different shape, but it’s still for powder and cream foundation buffing). CDJapan is carrying 20 or so of the limited edition silver BZ-1’s. However, I may get the BZ-2 (3,500) for detailed face work just because I think that the champagne handle and mauve-y ferrule are really nice. (Looks matter, yo!). But because it looks sorta, really small in comparison to the BZ-1 and its cousins, the BZ-2 is lower on my priority list. Sadly the exchange rate from yen to USD is unfavorable compared to last year (about 5% higher than last year’s high) but 1000 yen is still less than $10 USD. The yen is slowly, but steadily getting stronger so I’m trying to get all the brushes i want before the exchange advantage for the USD is minimized further. But there’s free shipping on CDJapan for orders over 10,000 yen  (more details here) and that a free bit of money you can spend somewhere else.

← So I Made My Own Brush Display Stand…
Yakusugi (even cheaper) and Limited Brushes on CDJapan, again. →